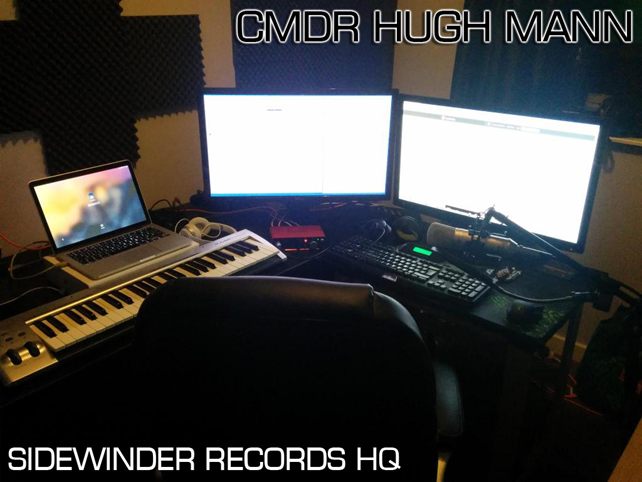 We’re huge music fans at Frontier Developments, so when we heard that CMDR Hugh Mann was making parodies of popular songs that were Elite-themed, we had to learn more about his creative process.

What exactly are you involved in with Elite Dangerous?

Elite Dangerous has become a major part of my life, far beyond just playing a video game. As well as twitch streaming the game and playing as part of a large player faction, I have been writing and recording parody songs based on the game for a few months now.

What inspired you to make music about Elite Dangeorus specifically?

It pretty much stemmed from wanting to make people laugh in my ED player group. I have always enjoyed singing and writing silly parody tunes, then became inspired by a certain ED streamer's running out of fuel to make the first parody “Hotel Dalgarno”. The first ED inspired piece of music however, was a national anthem for my player group, called “Imperia!” which was written in Latin.

By far the Community. It's been fantastic getting involved with so many likeminded people, and I've met dozens of great people through twitch, twitter and the ED community as a whole.  Aside from the incredible community based around the game, I think the way the game is being developed, at a technically level, is fantastic.

These sound really professional? Do you do things like this in your spare time? Or is it your job? Tell us about how you get started?

Thanks! I have been making and playing music since I was a teenager. I did music tech at A-level and university, was in a rock band for 10 years, and worked for a record label as a producer for a time, so I have a fair bit of experience in music production/creation behind me. I basically make a living from doing all kinds of music-related work!

What else are you involved in?

I am a lead member of a player faction called The Imperial Inquisition, which is now a minor faction in the game and has over 400 members. We are built mainly from twitch streamers who have recruited new and current players to our group. We try to help new players get started in the game and run different activities for members. I also try to network across all kinds of player groups, and am popping in and out of TS3 servers and discord channels chatting to people!

You must have had some other ideas that didn’t work for songs... what were they?

To be honest when I get an idea I run with it and try to make it work. It's usually obvious early on if a song isn't quite right. Luckily so far I've been fairly lucky with my choices!

I will always write the lyrics first and make sure I have everything I need on a text document. Then I'll get a decent instrumental version of the song I need. After that it’s a case of multi-tracking all the vocals and mixing. I generally try to make the vocals sound fairly close to the original songs.

How tricky is it to create these songs?

The recording/singing part isn't too hard as its just technical work really. The hardest part is getting the right song and writing decent lyrics that fit and make sense. Also trying to make it funny is tricky!

What's your favourite thing about the Elite: Dangerous community?

It's a great way to meet people who have similar interests. I find that most elite players share a love of astronomy and physics, and meeting and talking to new people about things like the mass of neutron stars is something I've never found in a gaming community before! Also the player created content, with groups like The Fuel Rats, is fantastic and constantly amazes me. Oh, and the amazing screenshots that explorers post from their travels! That's more than one thing isn't it...

What can we expect from you in future? Any new song ideas?

I have all kinds of txt files scattered about my desktop with half written lyrics and title ideas. There are definitely more songs to come, and possibly an Elite Dangerous Parody Album once I have enough songs!

Where can people find more about you and your songs?

I stream ED almost every day on my twitch page twitch.tv/CMDRHughMann. You can also follow me on twitter @CMDRHughMann and my soundcloud page where I upload eveything when finished: soundcloud.com/Elementz_360