Head of Technical Art and Rendering 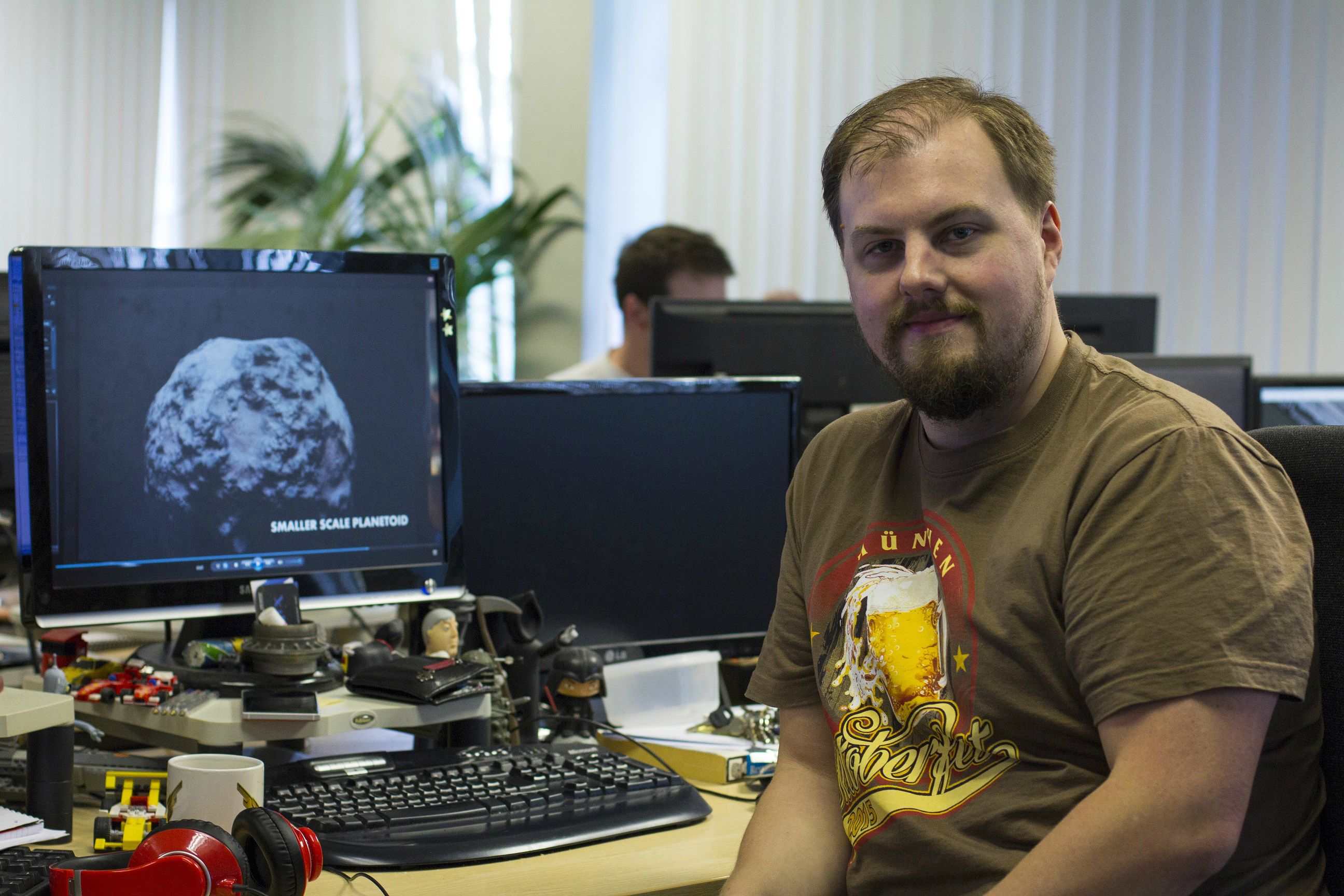 Every day is different! I work as the Head of Technical Art and Rendering which is a cross company role. Most of my time is spent on Elite although I do have work to do on our other awesome game (Planet coaster!) Being a Head of Department means I have a lot of meetings to go over things my team is looking at or things that may influence them. Monday morning is probably the busiest time for me, for example we have a leads meeting for each project first thing to cover the week ahead and any issues from the previous week.

After that we get into what we call the work streams, these are basically the threads of work we do, so we have a work stream for planets for example. We go through what everyone is up to and any issues, try and make sure everyone is aware of any deadlines or impacts from other departments and if we have any issues stopping people working or needing further discussion this is where we do that.

Across every week day morning we have a different leads meeting to discuss these work streams so a few months ago we’d talk about Elite in general on a Monday, Game-play on a Tuesday, Xbox on the Wednesday, Thursday was the point release meeting (1.3-1.4 etc) and Friday is Horizons day. The planets team work stream is three times a week, tech art once, render twice and then all the other ones in between to go through separate issues.

So yeah that’s quite a lot of meetings! When I can make it back to my desk I spend a lot of time working through various issues. My background is a technical artist so I spend a fair amount of time writing tools and looking at process and procedures to help the artists out.  The rest of the time is spent on the render side of things, the two go hand in hand quite nicely and I find it really rewarding to be able to work with all the talented artists and talented coders we have.

As many of you know we use our own engine so there’s quite a lot of things we do to try and always improve how people work. Having our engine gives us a huge amount of flexibility to change things but that comes with lots of additional decisions and choices. On top of that we have lots of tools that help the senior/lead artists keep track of what people are up to. This helps us find performance issues at the point we build things rather than having to find things later when they’re in game. As you can imagine we have a galaxy of assets so it can get quite complex in terms of tracking what changes we make and finding things that might be breaking something further down the chain.

As I’m writing this we’re coming to the end of the horizons work so I’m spending a lot of the time working with the team on what I call “the glue” how we integrate all the separate features together and make sure everything works smoothly. When you work on such a large feature as this, you often find that it can be a long way into the feature before you see things come together.

For example the initial work focused on generating the planet geometry and materials separately so we could get the right results with each before we bring them together. Then we work on letting the Artists create all the features on the terrain, how bases are formed and built, how lighting works, rocks, ice and all of that. Then these individual elements are folded back to the main game. We do this to try and let people work for as long and as uninterrupted as possible to maximise efficiency as once everything comes together you get more bugs and issues. All of that work ends up in a horizons version of the game that we keep separate until we’re ready to bring that to the main game and work on “the glue” then it’s on to QA and design to get the game-play working and all the features integrated fully. Meanwhile we focus on mopping any performance issues or little tweaks.

Tough question! There’s so much overall. It always amazes me to look back 3,6,9,12 months etc and see where we were. This time last year we were focusing on getting the first version of the game out and were just starting to understand the sheer size of it! Here we are now we’ve made some 400 Billion star systems and we’re letting people land on a huge chunk of those planets. The sheer size of the game is massive, every star known to mankind is in there and that’s a tiny fraction of what’s in the game, we’ve built the rest from science as we understand it today.

Everything in the game we’ve strived to make as real as possible, it’s life size and the sheer size is mind boggling. Has anyone ever done anything close to this size and believability? I don’t think so and there’s definitely a feeling in the studio that what we’re doing now is as ground breaking as the original game when it came out all those years ago.

That aspect I think is really important; to do justice to the original vision, stay true to what David wanted but also to bring it right up to date, it’s a massively rich experience and to have worked in such a senior position on something like this makes me quite humble. How many people get to say “yah the galaxy? Yah we made that!” It speaks volumes about the talent and dedication we have as a studio to get to that point, not forgetting the fans who joined us on that journey.

Like above I think the sheer scale and the boundless ambition. For every release we do there’s so much that we’d want to go back and add double/triple/quadruple! The to-do list is just massive and as long as we can we’ll be chewing through that to expand what’s there.

One of my personal highlights is seeing where people go, reading the forums and seeing the strange places people have discovered is amazing. I’m really looking forward to seeing all the worlds people are going to be exploring when we release Horizons. I keep meaning to try and calculate the approximate surface area we’re about to unleash on people. If anyone wants to guess It would be really fun to see in square km what we’re about to unlock!

(So we went and did the maths and turns out if you unwrapped all the land-able planets you’d create an area 10AU by 10AU (1.5 sextillion Olympic swimming pools if you think that way) which would be equivalent of a square with a length the same as Jupiter’s Orbit, so imagine driving from one side of Jupiter’s orbit to the other and that would be the length of one side of this area. Which just illustrates the size of the space in our galaxy! That’s several trillion planets all laid out and it can’t even fill our solar system. If you’re still feeling geeky then at 40kph it would take you 4000 years to make that 10AU drive. Thanks to Ant Ross for going through those numbers!)

I guess three things stand out for different reasons, in no particular order:

-Planets: I’ve spent quite awhile “looking after” some aspects of this with Producer Eddie and others, we’ve got a sizeable team of people working away on all the aspects and while I’m not going to try and claim any credit for their work I’d like to think that I’ve helped steer them on what I believe is the right road. What we’ve done is basically a lot of the stuff we wanted to do when we built the planets in season 1. For various reasons we used some different techniques but now it’s great to get back to how we wanted to structure them, fully science-based as much as we can make it.

-The galaxy map: This was where I spent a lot of time during year one on the project we had a small team and a lot to do. To represent all the galaxy’s 400 billion stars on a map in real-time where you can zoom in and out at will was a big ask. That’s on top of the artist element as well. As supposed to the planets the galaxy map had a lot more of my decision making in and the end result is pretty close to the original vision we discussed as the most viable way of doing it. Again all the guys did an amazing job and we spent a long time talking through things with David on a weekly basis. If you’ve not noticed yet David is hugely passionate about space and we had a lot of long conversations about how science met vision and what you’d see in various parts of the galaxy. It was also a key aim of mine to use the map to generate the in-game locations. Originally the plan was to generate the in game background by using a lot of separate techniques the map didn’t have but we worked hard to make sure the map was the focus and there’s only a few more expensive things we do when we generate the background for each location. This really helps tie the game together from my POV as the player can explore the galaxy via the map and get a flavour of the sky around any star before they get there.

-Lastly was CQC on Xbox One, it was a goal very early on that it had to run at 60fps to make it fun and playable and we did a lot of work to get to that target. It’s hopefully not noticeable but we changed a lot of things when players play CQC to allow us to optimise everything as much as possible. We did things this way as we’re very conscious of players feeling we might change the game negatively to support new features, we’ve really avoided doing that and always taken a harder approach to make sure we keep the main game as players love it. To get the game to run at 60fps in CQC mode was a big achievement.

Space is big.... and to-do lists can only ever get bigger!

Going for geek points here but I’ve met William Shatner and shaken his hand. The autograph is probably one of my most treasured items! Met captain Kirk and helped build the whole Galaxy, that’s small club isn’t it?

I ruined this by getting Ant to answer my earlier maths question! (sorry)

I guess I’d be curious to see how people think the game will be thought of in another 30 years, where will technology and gaming be and what influence or space will ED take up in the path there? Using all the various VR devices that are coming out while the games been in development has really made this all feel like a pivotal time in games and tech so I’m curious to see how history remembers this point in time.

We are streaming with Matthew tonight on our official YouTube channel (14th Oct at 7PM).