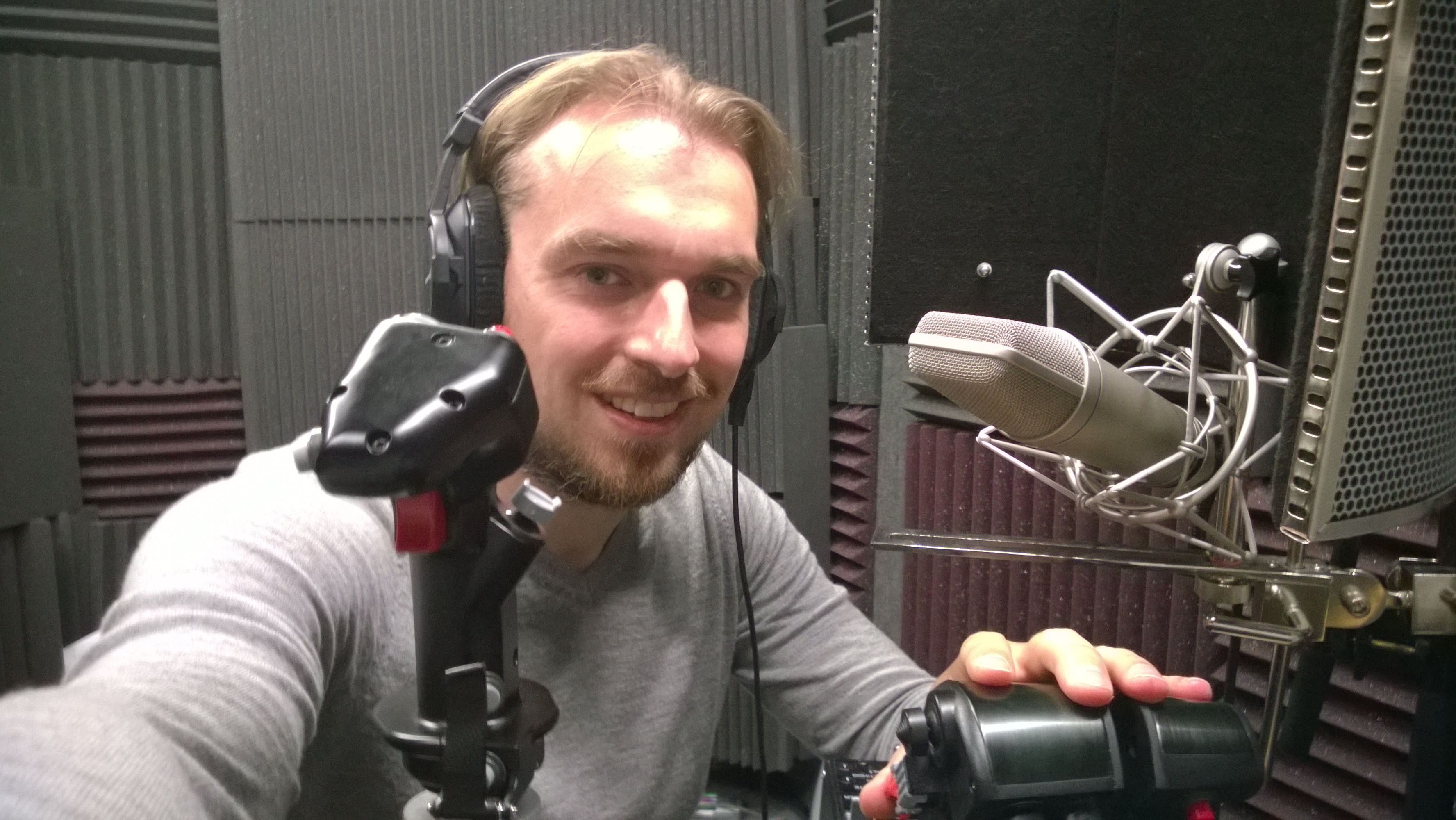 Vote for Elite Dangerous to win Best Audio at the Golden Joystick awards by clicking here.

With the rest of the audio team, I help create audio for Elite Dangerous. Occasionally I’ll have a sneaky-peak at the screens of my co-workers to see if there is anything awesome happening. Spoiler: there is, every single day!

We sound designers  are almost always tucked away in our little audio rooms, which is great when working on something that would annoy others, but it also means we’re not where all the cool stuff happens. So we have to make an effort to get out. Making games is as much about social engagement with the rest of the dev team as it is about technical and creative skill. Fortunately that’s not hard when people are always working on something amazing. Being among game developers always feels like you’re around family. Even at the Develop award show where Alien: Isolation won the audio award we were sitting next to those guys and all completely happy and excited for what they had achieved and done. We just love good audio in games no matter the platform or the title.

That social engagement extends to what our community thinks about too.  Reading up on people’s experiences on social media is great feedback. It makes me happy when there is a well-founded passionate discussion - even if I disagree - and makes me unhappy when people make assumptions and present them as fact.

What aspect of the game have you’ve worked on that you are most proud of?

Everyone in the audio team contributes equally, so proud feelings go all around. The first was presenting the Multicannon and Pulse Laser sounds shortly after starting at Frontier. I’d never done anything like those before and it was fun coming up with something sounding physical rather than magic sci-fi. We wanted our weapons to sound large and clunky instead of slick and all-powerful because combat is strategic rather than twitchy. The most important thing was not to cause listening fatigue, annoy or get repetitive on those sounds.

Gun sounds are specifically designed for being heard when playing the game. Now that might sound a bit obvious but what that means is that they don’t work equally well away from that context. Our sounds are designed to work best the moment you press a button or pull a trigger. Compared to watching a film, there is a subtle difference, but it is strong enough that for trailers we use a slightly adapted version of weapon sounds, simply because that works better in that context.

That first presentation is probably what got me through probation which makes me proud to this day.

There is also the GUI audio which I am overall most proud of. It was a true multi-people involvement. Duncan created a ton of base sounds. Jim (Croft, Head of Audio) filtered, stretched and experimented with them and Joe (Hogan, Lead Audio Designer) guided results away from anything that sounded too much like something you’d hear in a film or other game.

My first instinct was to consider a mechanical sounding interface which raised a few eyebrows as that seemed counter-intuitive to the magical ‘out-of-thin-air’ appearance of holographic technology.  It looks like made out of air and glass, surely it has to sound delicate?

I couldn’t just say: ’No... I am right, it needs to sound like it’s always struggling, like it has just enough power to do what it needs to do,’ so coming up with a plausible answer to why it doesn’t sound modern meant writing a fictional article about the development and acceptance of holographic displays during the 34th century!  The article reasons that pilots are conservative in adapting new technology which is not too dissimilar to what you see on terrestrial aircraft today.

For a while, Elite Dangerous was using mocked up, simple GUI sounds which were ripped straight from an existing library. It served its feedback purpose but it lacked identity and had not been mixed properly.

That was the situation as we arrived into our presentation to David Braben. I had never been more nervous in presenting our work! It helped that almost simultaneously Jon (Pace, Head of UI) presented revamped GUI graphics which followed the same visual logic as had our sound direction and that brought it together rather beautifully. David liked the aesthetic of it and made very helpful suggestions how to make those sounds even better.

The scale of it all just boggles the mind and for me this has been the deepest most forward thinking project to work on. All of it is procedural, nothing is scripted and everything is connected in such an agile way so we don’t need to require a monthly subscription. That represents a complex interaction of systems, a mindboggling amount of code and well over half a million developer hours .

I love so many things about this game and working at Frontier Developments that it feels like a disservice to mention just one thing, but it’s the feeling of flying your ship. Processes like docking or gracefully approaching a station in supercruise have a satisfaction about them that represents little victories without explicit reward. There is always this internal ‘want’ to try and improve on those things. We are not chasing points or another unlock... flying a ship in Elite is a process of mastering perfection in a procedural, unpredictable world. It is an emotional response which the entire design team nailed.

In the earlier days of game audio, we wrestled limited resources. Now, we have an opposite situation where we can pretty much design and implement whatever we want, but without proper prioritizing ‘whatever-we-want’ ends up sounding like a wall of noise.

We want any engagement to sound like a cinematic cut scene. It is an ongoing process; we constantly need to remix the game as more features and content are added that need to sit well with existing audio.

That there is no sound in space and everyone’s first instinct is to try and honor that idea. But it’s a rather un-exciting direction. There are films that do it well, but they have the advantage of being able to ’edit‘ away from the silence. Of course we tried it and it really... really didn’t work.

Jim and Joe made the right call in going for what ‘feels’ right, rather than what is physically correct. The speaker array inside the cockpit simulates all audio happenings in real-time, and the original idea surfaces when you lose your cockpit glass and all audio no longer has air to resonate with.

None! I like the anarchy systems. Not because they are lawless but because they are on the outer edges and trying to build up something. I am drawn to edges of settlements rather than centers. Besides, with the Federation bombing animals from orbit and the whole born-into-riches Empire lifestyle, it really has to be Alliance or anarchy no?

I am the English voice with the Dutch accent heard inside Alliance stations!

We play lots of games at Frontier! What games are you playing right now besides Elite Dangerous?

And remember to vote for Elite Dangerous in the Golden Joystick awards.